Nothing says power like a F15 fighter jet roaring directly over your head. An Israeli flown F15.

Israel’s Air Force pilots are known to be the best in the world. Their training requires physical perfection, sharp reflexes, an extremely sharp mind and a very strong will. The course is three years long. Those that complete it graduate with a degree (in math, physics or political science), the rank of Lieutenant and pilots wings. Few fit the requirements. Out of every six that begin the course only one completes it.

Getting your pilots wings is the pinnacle of accomplishment. At the dress rehearsal for the graduation ceremony the new pilots get their officer’s ranks. At the final ceremony they get their wings. That is the moment when they officially join the prestigious family of Israel’s Air Force Pilots. That is the order of importance – there are many lieutenants but few pilots.

The pilots’ graduation ceremony is not open to the public, it is by invitation only. The families of the graduates are invited as are a few media representatives and the premier figures of the Israeli State; government and military. The Prime Minister, Minister of Defense, the Chief of Staff of the IDF and the Commander of the Israeli Air Force come to honor the graduates. That is how important the new pilots are to the country. That is how great their accomplishment is.

This year Lenny managed to get us tickets to the graduation ceremony. A few months before his eldest son is supposed to be inducted in to the army (mandatory service), a little bit before his youngest will begin the initial placement process for his army service, we were able to show them what it means to be the best of the best.

Israel, contrary to common assumptions, does not glorify the military. It’s something that needs to be done but it’s not “cool”. Most Israelis treat the military with a “been there, done that” attitude. In general Israelis are very cynical and not awed by anything.

Pilots are the exception. They are in a completely different league.

Historically IAF pilots were treated as second only to God. Throughout the years it has been the IAF that brought stunning victory and exceptional accomplishment to Israel. During the Six Day War the Israeli Air Force, with just 196 combat aircraft at its disposal prevailed over a coalition that had approximately 600 combat aircraft. The IAF destroyed 452 enemy aircraft, including 79 in air combat, while losing 46 of its own. Legendary IAF air-battles are still taught to this day in flight schools worldwide, for example the 1973 Ofira Air Battle, involving two Israeli Phantoms versus 28 Egyptian MiG-17s and MiG-21s. In the aerial combat that ensued, the Phantom pair managed to down 7 to 8 Egyptian planes and drive off the rest. It was the IAF that destroyed Iraq’s nuclear reactor in 1981 and more recently a reactor being built in Syria. In 1991, the IAF carried out Operation Solomon which brought Ethiopian Jews to Israel. Throughout the years, the IAF has been key to Israel’s safety, protecting IDF troops, precision targeting our enemies, going on both attack and rescue missions. Churchill famously said: “Never was so much owed by so many to so few”. This statement gains even more weight and relevance when applied to the Nation of Israel and her pilots.

Having a tendency to disregard style, focusing solely on content, Israelis are notoriously terrible at ceremonies.  In the case of the IAF pilots graduation ceremony the content dictates the style and it is impossible to come away unmoved.

Everything focused around the pilots, their place in history, their accomplishments and their role in protecting the future of the nation. The audience was there to see their sons (and daughter!) at a landmark occasion. The dignitaries that spoke conveyed messages to the pilots, expressing pride in their accomplishment and describing how they envision their future.

Prime Minister Benjamin Netanyahu’s speech was particularly interesting. He laid out the current threats against the nation and the world, the Shia Islamic State of Iran and the Sunni Islamic State, ISIS. Equally dangerous, both hell-bent on destroying the Israel and creating a global Caliphate, the IAF will be key in ensuring their nightmare vision does not become a reality. Netanyahu described the IAF as “One of longest arms of Israel’s security. One that can reach near to home, in Gaza or in Syria when needed and can also reach anywhere else that it will be necessary to go.”

All the dignitaries that spoke honored, in addition to the pilots, wounded warriors from Operation Protective Edge as well as the families of Lt. Hadar Goldin and Staff Sergeant Oron Shaul, killed during the Operation in such a way that Israel was unable to retrieve their bodies. A source of great pain to the families, the dignitaries promised to do everything in their power to bring the soldiers bodies back to their families. Minister of Defense Moshe Ya’alon is closely related to the Goldin family.

The graduating pilots stood in front of the stage from which the dignitaries spoke. The pilots-to-be in the classes following the graduating class stood behind them. Those amongst them who succeed in the course will be in the center next time.

Other pilots demonstrated the capabilities of the aircrafts of the IAF. Words are shabby tools, incapable of accurately capturing the stunning aerial display.

They brought out the renowned “Spitfire 57” known as the “Black Spit”. An aerobatics team (that also serve as flight instructors) displayed their precision and coordination in a display that exemplified the joy of flight.

Pilots demonstrated their ability to refuel both helicopters and fighter jets midflight. This difficult and dangerous maneuver is crucial when it is necessary to undertake missions that are far from home.

We witnessed the complexity and drama of a dog-fight – one fighter jet chases the other through the sky, the other trying desperately to escape, to not be downed by the enemy’s missiles (in this demonstrations the pilots released flares as would be done in a real scenario to draw off the enemy’s heat seeking missiles). The pilots, equally skilled, put on a glorious chase. One could not lose the other, the follower could not catch the leader. They flew across the sky, diving low, rolling, climbing straight up in to the heavens until it was impossible to see them and slicing the air sidewise as they sped low again, flying in to the sun and zooming over the audience.

Then we saw the helicopters. The Apache attacked a target, blowing it up. As smoke billowed in to the air another helicopter demonstrated rescuing soldiers from the ground. The Black Hawk stood still, mid-air, as a soldier rappelled down with a stretcher. The scene looked exactly like a battlefield. This is evacuation of wounded, the Apache covering the difficult rescue, smoke roiling the entire time.

As the helicopters flew off an F15 took the runway, thundering in to the air. Nothing says power like a F15 fighter jet roaring directly over your head. I could feel every cell in my body vibrating. Fluid and mighty, this is what supremacy looks like.

And yet that is not accurate. Other Air Forces have the same aircrafts, including our not-so-friendly neighbors. Even so, it is the IAF that owns the sky. Why? The cynical, detractors of Israel say that our might comes from American tools but that is not the truth. When Israel had inferior planes, the IAF triumphed. When our fighter jets came from France the IAF triumphed. It is not the tools but their operators that create the necessary results. Fine as the aircraft might be, our strength comes from the pilot inside.

It was after the ceremony was over, after the pilots had received their wings and per tradition, thrown their hats in the air, that I saw the true might of the IAF. It was the moment when the new pilots ran towards the audience, leapt the guardrail and flung themselves in to the arms of their proud families.

That is the might of the Israeli Air Force. That is the source of our power. 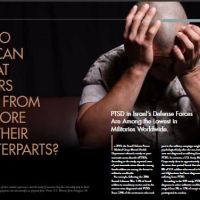 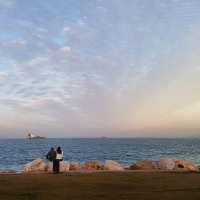 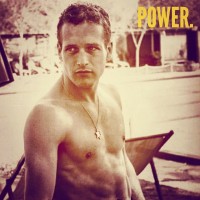 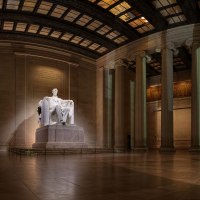 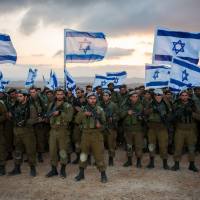