The saying goes: “The dead tell no tales” but that’s not exactly true. The dead speak to us from beyond the grave but they do so in silent symbols that we, those who are full of life and sometimes full of arrogance, can choose to ignore.

Haifa’s cemetery is full. It’s in a beautiful location, overlooking the sea. One could say it’s wasted on its residents but maybe the scenery provides comfort to those who come to pay their respects to deceased relatives and friends. In general, I find it an unpleasant place. It’s packed with graves, so much so that it is difficult to walk between them. Moreover, most of the headstones provide very little information about the people they are supposed to be memorializing.

I think graves should give you a hint, a glimpse into the life of the person buried there. Something about knowing nothing about their stories bothers me.

There is, however, another cemetery in Haifa, one that is older and very different.

This was the first Jewish cemetery of Haifa, presumably founded in the late 1850 and used until 1940. There are several mausoleums in the cemetery (which is unusual for Jewish cemeteries), including one for Shmuel Pevsner, one of the founders of Haifa’s Hadar HaCarmel neighborhood.

We know the names of some of the people buried because they have streets and institutions in Haifa named after them – but once they weren’t streets, they were real people who now lie here, mostly forgotten.

Why isn’t this a national heritage site? How come the schools of Haifa don’t bring children here, to learn about the history of their city?

We’re told that Haifa is a mixed Arab and Jewish city, a symbol of coexistence, that it always was. That makes this a little hard to explain: 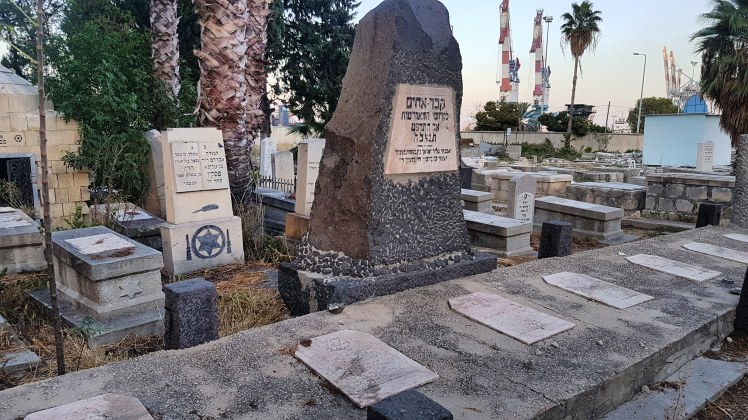 A mass grave for Jews murdered in the riots of 1929. Jewish burial is very specific, careful and done with great reverence. Tradition forbids letting the dead lie unburied overnight, it is imperative to bury them on the day of death. It would seem that the existence of a mass grave is indicative of the number of people murdered on the same day and the difficulty in providing them a proper burial.

The quote on the standing stone is from Ezekiel (16:6) and tells volumes about the spirit of the people who had to bury their friends and relatives in this way:

“As I passed over you and saw you weltering in your own blood, I said to you, as you lay thus in your blood, in your blood LIVE”

The graves nearby are also of victims of the riots. 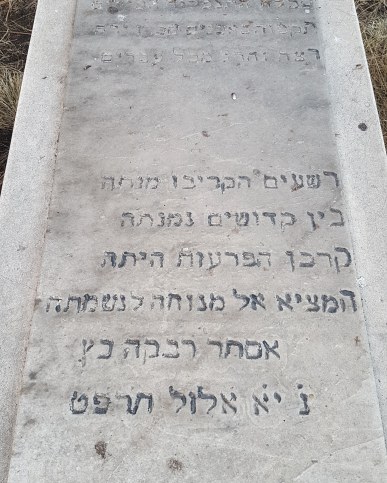 This one tells the story of Esther Rivka Katz: “Wicked people made her death come faster than it should have. She was a saint and victim of the riots. May God grant rest to her soul”

I have to use Google to verify the Gregorian equivalent of Hebrew dates. Modern headstones usually use both the Hebrew and Gregorian dates but the Jews of Israel, living Jewish lives in their ancestral homeland, before the reestablishment of the Jewish State, were different.

Haifa is promoted as a place to become familiar with the charm of Arab culture. Jewish influence on the city is treated as something non-existent, insignificant or as foreign.

I didn’t specifically look for the grave of Leon Stein, found it by chance. It was covered in leaves but the words I could see piqued my curiosity.

His grave is not silent, it simply needs someone willing to listen. 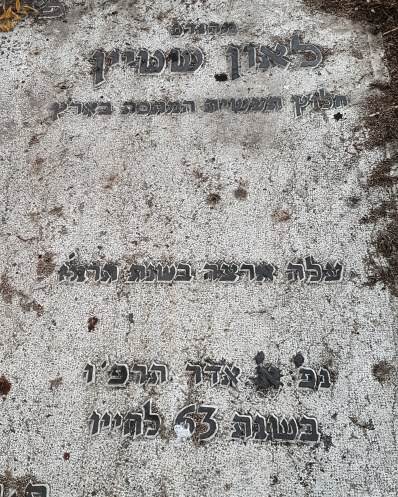 Engineer
Leon Stein
Pioneer of the metal industry in Israel

I’ve never seen a grave that gives the title Engineer like other graves might place the title Cohen-Tzedek, indicating someone who comes from the lineage of priests who would have served at the ancient Jewish Temple.

Who was this man? Born in 1864 in Poland, he followed in the footsteps of his older brother and made aliyah as a grown man of 23. Many of the other residents of the cemetery didn’t live longer than that (albeit many of the young deaths were those murdered in the riots).

Leon went to France and bought metalworking equipment and in 1888 he opened a small metal works shop to address the needs of the growing community. Slowly his business grew and he upgraded the technology of the equipment used from hand run to running on a steam engine and then on a kerosene engine – the first in Israel. From fixing metal equipment, he advanced to producing agricultural equipment.

At the time agricultural development was difficult because there was no pump strong enough to produce large amounts of clean water. Leon Stein, in collaboration with Abba Neeman, invented a pump that increased water production from 5-6 m2 an hour (powered by beast of burden, probably donkeys or mules) to 100 m2 an hour (running on kerosene).

As a result, within 14 years, the agricultural cultivation in Israel increased threefold!

Stein’s factory continued to grow, manufacturing equipment for flour mills, ice-making machines, iron gates and more. The number of employees rose from 40 in 1905 to 125 in 1907 and 150 in 1909. The plant was spread over several plots and a branch was also established in Petah Tikva. The factory’s technicians went to all parts of the country to assist in assembling engines.

They exported products to Syria, Lebanon, Transjordan and Egypt.

How times have changed.

The stories of the dead tell of proud Jews, living Jewish lives in their ancestral homeland, long before the Declaration of Independence. Their stubbornness is written in stone, their murderous Arab neighbors would not move them from the land. Lying in their own blood, burying family and friends, they took upon themselves the commandment to LIVE. And all the while they were developing the land (and any of the neighboring countries who also wanted to progress), bringing modern technology and equipment that would help build the country we have today.

There is a deliberate movement to undermine Jewish connection to the land, delegitimize, minimize and dismiss Jewish history. It’s not just in the ravings of BDSers it’s an insidious poison that has penetrated, quietly in many different variations into Israel – often in what is not said, what is not taught, not emphasized.

The dead lie quietly. Those who want to, who find it politically expedient to do so, can ignore their voices or attempt to drown them out with other stories. The dead do not impose themselves on the living, it is up to us to remember, inquire and pay attention.

The truth of their lives, their history, our history, is etched in stone for anyone willing to see.

One thought on “The dead tell no tales… or do they?”