Our people will forever be connected. Jews and Germans, Israel and Germany… the actions of your parents and grandparents have created an unbreakable tie between our nations. We are two sides of the same coin.

Today, as a Jew and an Israeli I want to cry for your country, for your culture. In an ironic turn of history, it is I that fears for your future.

The world still marvels, “How is it possible that the most civilized nation on earth, the German people, could commit the atrocities of the Holocaust?” Such a cultured nation, one so industrious and efficient is an obvious leader.

Then you led the people of Europe to follow in your footsteps and copy your crimes. Today you are still the leader of Europe. It is not France, Italy or Spain that sets the tone. It is not even Great Britain. It is you – Germany. Europe looks to you and so does the world. What will Germany do? How will the Germans respond? 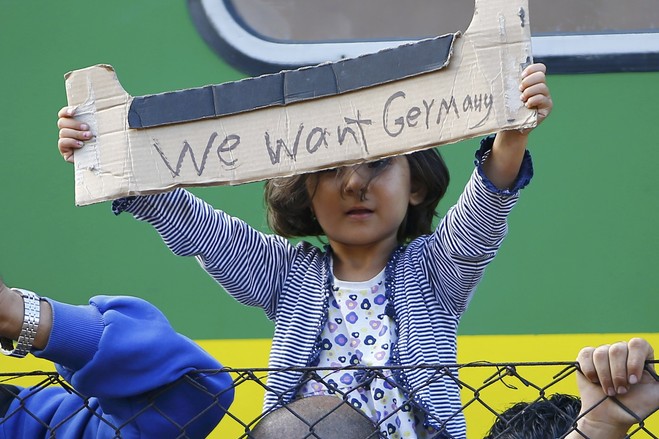 Now that there is a “refugee” crisis, your nation has opened its arms wide, as if swallowing the influx of people swarming in to your land, paying for them and adapting to their way of life will atone for the crimes of your fathers and grandfathers. In actuality, you have flung your arms wide to embrace the hara-kiri blade.

The people you are inviting in to your land are not those that truly fleeing the atrocities of the Islamic State or of the war in Syria. Those whose lives are in endanger, those whose heads are being chopped off, sons stolen and forced to fight, women and daughters sold in to sex slavery are those who are left behind. Those who truly need help are still in Syria and Iraq (and Yemen, Nigeria and Somalia). The people flooding your land are people who want a better life. They want a prosperous economy. A place where they will be taken care of.

Unlike the Jews of Germany who considered themselves German first and Jews second, these new immigrants to your land will always be Muslims first.

Many people will say that it is human to desire a better life, that all people deserve a chance to do so, that people who want a better life should be assisted. This is of course true. It doesn’t however mean that you need to let your country be overrun.

The Kurdish people live in the same conditions as the people of Syria (and in some cases worse conditions). The war is taking a toll on their land, making it near impossible to continue normal life. Are the Kurds flooding Europe to escape these conditions? No. They stay and fight for freedom in their own land. They fight for their country, to protect their children and secure a future for themselves. The people of Syria, Iraq and all other Arab nations that have seen European generosity to those fleeing war – they are taking advantage of you. Instead of striving to correct the conditions in their own lands, they are bringing those conditions to your land.

I understand that it is shame that guides your choices today. I understand that swarms of men, women and children walking to a new life makes for good tv. This however does not absolve you from thinking and carefully weighing your actions.

Now is the time to throw the politically correct out of the window and instead focus on being morally correct.

My dear Germans, you are the tipping point. The actions of your nation will decide the fate of the world. Will you allow this refugee crisis be the death of Europe? The end of Germany?

This is a dangerous time. This is a deciding moment for the spirit of Germany. Your fathers and grandfathers chose actions of violence, cruelty and apathy. Now you have been given the opportunity to choose. You can choose better.

You must not repeat the mistakes of your past. You must not become violent or hateful. You must not exterminate another race. At the same time, if you allow your nation to be overrun your culture will be conquered and your nation will quickly become unrecognizable.

You must make moral choices, not the easy choices.

My heart cries for you. Israel’s position is clear cut. It is much easier to see what is right for our nation. For Germany it is more difficult and this difficulty is heart-wrenching. Israel either lives or dies. Germany can die by continuing to live, by continuing down the same path she is currently on.

I hope it is not too late…

Concerned in Israel,
Me

17 thoughts on “My heart cries for Germany”