There are some people who don’t hear when others speak the word, “impossible.” Instead, they hear, “it’s possible” or “I am possible.” Their minds begin to race in search for solutions and when there is no logical reason to succeed, faith moves them forward.

Who could look at the barren hills of Eretz Yisrael and imagine that dead land awakened, brought back to life? What kind of people could look at rocky crags and see rolling vineyards, empty plains and see cosmopolitan cities bursting with Jews? How is it possible for people who never did a day of physical labor in their life to see themselves as farmers and know that one day their children would speak a language 3000 years old as if it was the most natural thing in the world?

And today, the children of Israel grow up like children in any other first world country. With few of the discomforts of life, all the modern amenities and their faces buried in their phones, computers and tv screens.

What kind of modern child would willingly put down their phone, turn off the tv and go outside to sweat in the sun? What for? They don’t know what hard work is and why in the world would they want to do any kind of physical labor? There is no necessity that could drive them, no demand.

And certainly, no teenager would dedicate a year of their life to creating a youth movement designed to connect the children of Israel to the land of Israel. Who would join a movement that doesn’t exist?

It could never happen. Or at least that’s what the founders of the Shomer HaChadash Youth Movement were told.

But it did. And today, after just one year, it’s the fastest growing youth movement in Israel, a country with well-established youth movements existing for every sector of the population. Their signature shirt has become the most desirable branded piece of clothing among Israeli schoolchildren – a shirt emblazoned with the words: “I am my brother’s keeper” and a symbol of Alexander Zaid, one of the great original Zionist leaders, a man the children of today no longer learn about in school. 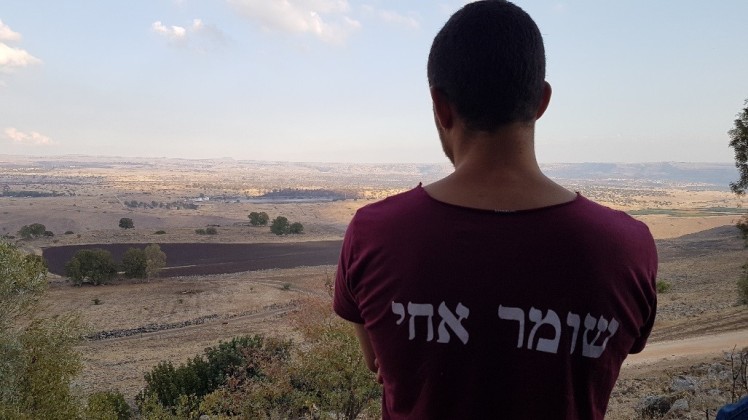 How can this be? What is going on here?

The malaise of screens, passivity, low interest, and little knowledge seems to be an epidemic of the advanced world (and some of the developing world as well). Where once people were independent at a very young age, today young people remain “children” for a very long time, dependent on their parents, expecting guidance from someone else – a parent, an authority, the State.

In Israel, just two generations ago it was impossible to know whether the State would continue to exist. Three generations ago, the State was just a dream. Today, many take it for granted. Schools teach very little (if anything) about the visionaries who created what we have today. Children know the names of those who shaped our existence as the names of streets and institutions rather than the content of their works or the stories of their endeavors.

It was this gap that the founders of the Shomer HaChadash recognized. Originally founded as a revival of the original Shomer, the organization was designed to assist Israeli farmers in protecting their land from agricultural crime – through knowledge of history and understanding that the solutions that worked for our grandparents would work today, that while the State has difficulty to address all the challenges at hand, many can be solved and even prevented by friends and neighbors stepping up and declaring: “I am my brother’s keeper.”

The demand was so large, the Shomer HaChadash grew at an incredible pace and yet, as the fight to protect the connection of farmers to the land grew, it became more and more obvious how disconnected the younger generations already are.

Here too, the founders of the Shomer believed, the solution from the past would work. Just as the generations who came before us managed to breathe vitality into the land through reigniting the love story between our people and this land, now it has become time to ask the land to give purpose and direction to the children who need to deepen their roots.

While the malaise of screens is a global issue, our story is deeper than the challenges of city-dwellers who don’t know where their food comes from and the entitlement of millennials. Ours is a relationship with the land, a centuries-old love story – the connection of an indigenous people returned to the land that gave birth to our nation. A Jew is a Jew anywhere in the world but there is a special kind of fulfillment, a completeness that comes from connecting to the land of our ancestors.

As I watched the ceremony concluding the first year of the Shomer HaChadash Youth Movement I found myself thinking: “How many people does it take to create a revolution? To change an entire society?”

There stood before me a group of some 30 people: the managers of the program and high-school graduates, boys and girls, who had volunteered to postpone their army service for one year in order to give an additional year of service to the country via the Shomer HaChadash program. This year does not count as part of their army service and the only thing they get for the year is the experience they gained.

They had split into communal living groups in different communities in Israel. Each group had built their own teaching farm, along with the children of that community and together they grew vegetables and spices. Very deliberately they chose to work with grade-school children (1st – 9th grade) rather than high-schoolers, to influence the new generation as they grow up, with an unadulterated connection to the land. 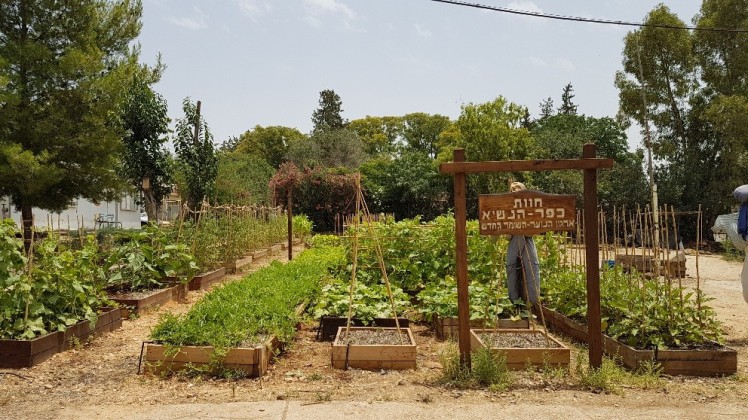 During the year, the volunteers (called in Hebrew Shin Shinim, an abbreviation of the term for “year of service”) were given lessons in agriculture, history, and Zionism. No one told them how to manage their agricultural farm or how to teach the children. It was they who managed themselves – their schedule and budget, building lesson plans for the children and taking care of them every day, after school.

Everything they built, they built with their own hands. 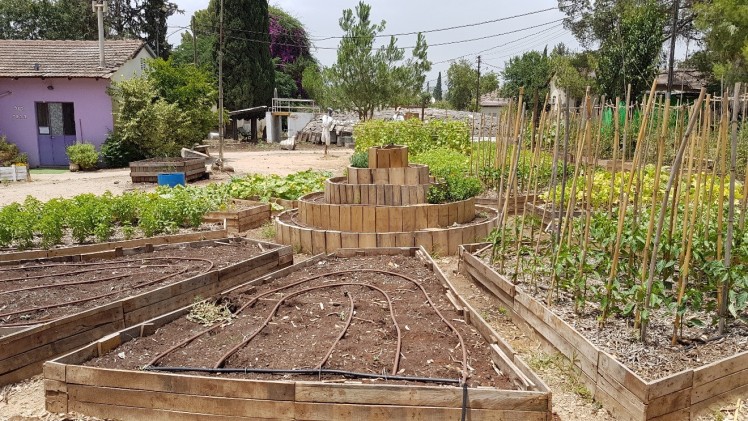 Everything they grew was fruits of their planning, planting and nurturing. 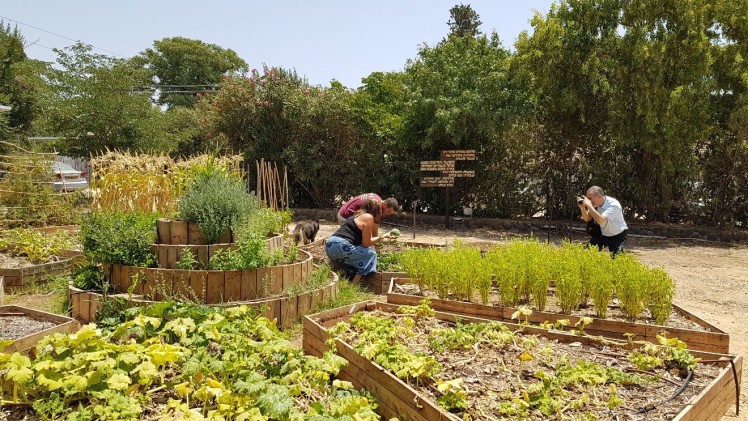 Small children planted cucumbers, tomatoes, eggplant, watermelon, squash and more. They worked in the hot sun, patiently cared for the vegetables as they grew, learned to pick them at the right time and then sold them to members of their community. After school, instead of going home and turning on the tv, they stayed together and worked, creating new life.

In addition to working with the children of the community in which they lived, each group of volunteers spent time in schools, creating within the school a smaller version of their larger farms. The program was so phenomenally successful that for the next year additional communities are competing to see who will be able to have their own volunteers to create a farm with their children.

So few can create so much, for so many.

The volunteers had spent a year studying the history of our people, the movement that led to the revival of our nation in our ancestral homeland and learning to care for the land. They were taught not what to think, but to make up their own minds after gaining their own personal understanding of the issue. Most of all, they were taught not to be afraid of standing in the gap, even if everyone is walking in one direction, if they are sure it is right, to walk in their own direction.

How many people does it take to create a revolution? To change a society? I don’t know.

What I do know is that those who don’t hear the word “impossible,” the dreamers, those who are crazy enough to believe they can change the world, usually do.

YOU can be part of this success!

Send your kids to a Shomer HaChadash pioneering program for overseas participants:  https://bit.ly/2ASoVjV

6 thoughts on “HaShomer HaChadash: This is a love story between a land and her people, a people and their land” 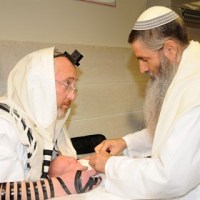 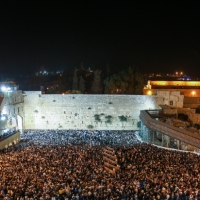 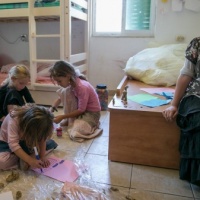 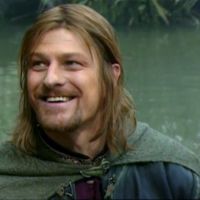 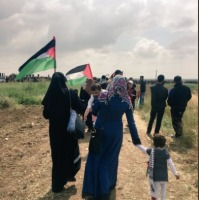